Shawls made from Tibetan antelope wool

Shahtoosh wool obtained from the Tibetan antelope is considered to be the finest wool in the world. Three to five antelopes are killed in order to produce a shahtoosh shawl. As a result, the antelopes are an endangered species and trade in the shawls is strictly prohibited.

The consistently high number of seizures shows that the trade in these “shawls of shame” is an ongoing issue. Efforts to combat the trade remain essential to prevent the Tibetan antelope from becoming extinct. 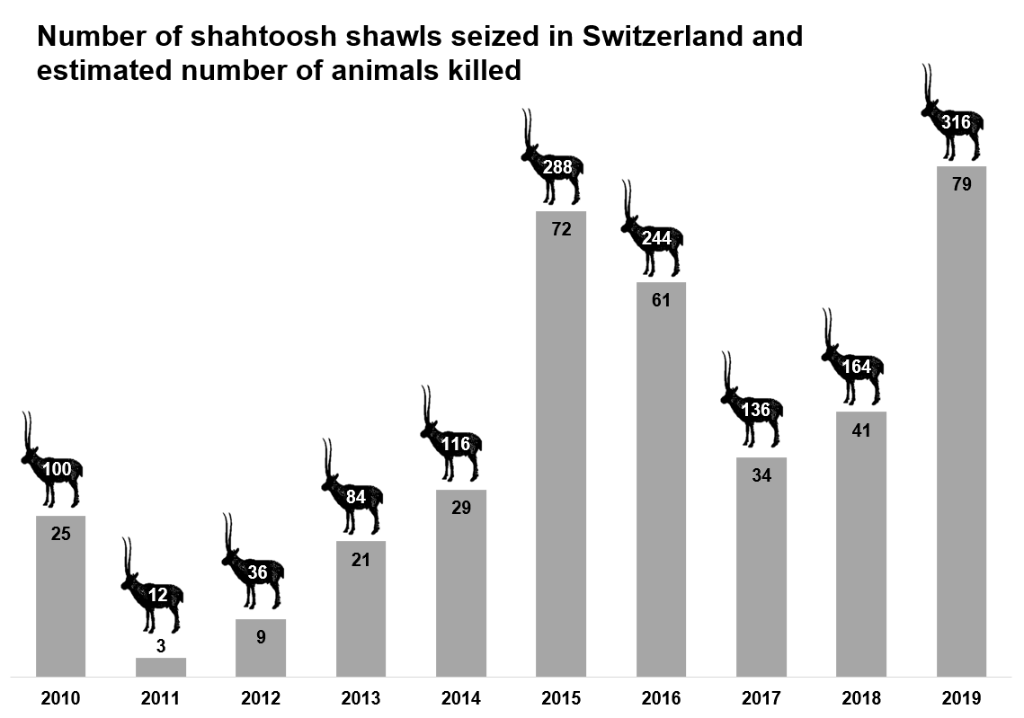 This trade is organised on an international scale and the number of shawls seized in Switzerland is only the tip of the iceberg.

The wool of the Tibetan antelope is considered to be the finest, warmest and softest wool in the world. The wool is obtained from wild antelopes. The animals live at altitudes up to 5,000 metres and have thus developed a fleece adapted to the very cold climate. Since they cannot be domesticated for shearing and the trade in their wool is strictly prohibited, the animals are killed illegally.

Three to five Tibetan antelopes are killed to produce a single shawl. As a result, this protected species has seen a 90 % decline in its population within a century.

The Tibetan antelope has been listed in CITES Appendix I since 1979. It therefore has the same protection status as elephants, tigers and rhinos; in other words, all trade in products derived from this species is strictly prohibited.

These shawls are luxury products. A shawl can cost up to 25,000 Swiss francs. Switzerland is an importing country because it has a clientele which can afford to buy them.

In 2019, the FSVO and the Swiss Federal Office for Customs and Border Security  (FOCBS) seized 79 shawls made from shahtoosh wool.

The consistently high number of seizures shows that the trade in these “shawls of shame” is an ongoing issue. This trade is organised on an international scale and the number of shawls seized in Switzerland is only the tip of the iceberg.

In order to combat this illegal international trade effectively, the FSVO works closely with Interpol and Europol, and also with the countries producing this wool. It is vital to raise their awareness of the problem of species conservation and to prevent exports of shawls.

The FSVO is also working to educate consumers, who are often unaware that they are wearing wool obtained from an endangered species.